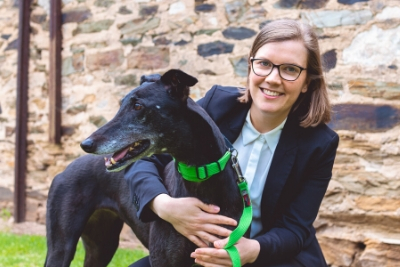 Chloe is a lawyer at the RSPCA. She is called a ‘prosecutor’ which means she goes to court when someone has broken the law.  Chloe works together with the Inspectors who investigate reports that come to the RSPCA about animals in trouble. When the RSPCA gets a report, an Inspector investigates which includes speaking to people about what they know or saw and taking photos and videos. Sometimes, animals who are injured or sick need to be taken to the vet by the Inspector. The Inspector collects lots of information and puts it together like a storybook. We call this a ‘brief’ or ‘the evidence’. When an investigation is finished, sometimes there is evidence of animal cruelty or neglect.

The brief is then taken to Chloe and she looks at all of the information and decides whether the law has been broken. You probably know already that laws are rules which we have in our society to makes sure everyone is safe and respected. There are laws in South Australia which say that people are not allowed to ill treat animals. This means that people who own animals need to look after them properly and people cannot be cruel or violent towards animals. If the brief shows someone has broken the law, that person is taken to court. Sometimes this is called a ‘court hearing’ or ‘court case’.

At a court hearing, three people need to be there. Firstly, Chloe goes to tell the court how the law has been broken and what the evidence is to prove it. Secondly, the person who has broken the law also comes to court. This person can bring their own lawyer to help them. Thirdly, a Magistrate must be there. The Magistrate is like the principal at school. He or she listens to everyone, makes sure everyone follows the rules and decides whether the law has been broken.

Prosecuting animal cruelty cases is rewarding and challenging. Each case is unique so it is important to Chloe to make sure each case is carefully read and she is prepared for court.